We arrive in Santa Clara, Cuba!

Thursday, September 17. An agonizingly early start today. We have a 4:30 wake-up call for a 5 AM departure to the Miami airport. Our Road Scholar tour leader was on the job and helped all of us begin our journey to learn as much as we can about the people and culture of Cuba. An hour after taking off we arrived in Santa Clara, Cuba, and by mid morning we were on the bus heading for our first Cuban experience. We drove through this rundown but surprisingly clean town to a cigar factory. We were not allowed to take pictures inside, but learned a lot about the process. Each cigar is composed of five kinds of leaves: one each for aroma, strength, combustion, glue, and the outer wrapper. Surprisingly, all five kinds of leaves grow on the same plant, just in different locations. There is an extensive training program for this job, which pays well by Cuban standards. (Note: the average Cuban earns about $25 US per month.) Each cigar is carefully inspected for quality and to be sure it draws properly. They even have a special machine for that. The cigar factory is owned by the government, like most enterprises here. In recent years, since Raúl succeeded to the presidency Fidel had occupied for half a century, some privately owned businesses have developed, but this is not one of them. Most are restaurants, called paladars, or B&Bs. The big restaurants and hotels are government owned, but it is supposed that privately owned businesses will increase dramatically in coming years, especially after Raúl steps down in 2018. (Note: Cubans don’t use last names to refer to their leaders. I don’t know why, but first names prevail.) 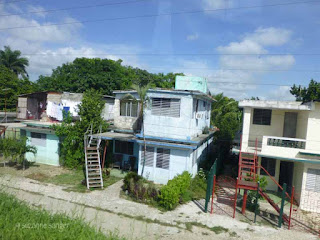 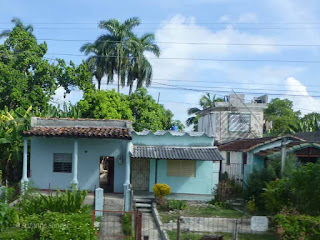 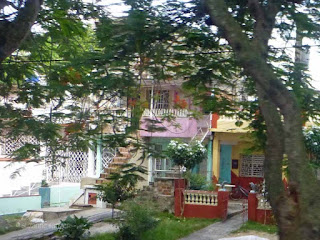 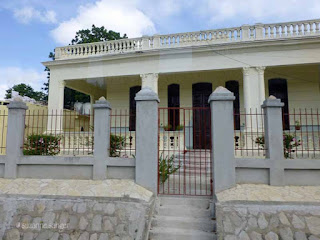 After a stop in the Santa Clara town square, we lunched in a local paladar, one of Cuba’s relatively new privately owned restaurants, which turned out to be very nice! We were given our first Cuban welcome drink—a pińa colada. The custom here is to serve the virgin drink to everyone and then come around with a bottle of rum for anyone who wants a little kick added. The pińa coladas were so good that when we were told we could order a second drink, most of us ordered another one instead of the water, wine, beer, or soda they probably meant us to have. This turned out to be the last time the options for the second drink weren’t specified. LOL. Lunch was a huge buffet with all kinds of vegetables, fruits and several meats, as well as desserts. We have been warned that meals in Cuba are huge even by American standards. For that reason, Road Scholar has arranged for buffets or family style service whenever possible, so we can take what we want and not waste as much food as they did when meals were plated in the kitchen. Our lunch was followed by a concert by a well-known Cuban singer, who performed with his guitar, accompanied by his son on violin. Of course, CDs were available for purchase. 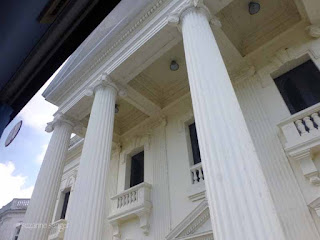 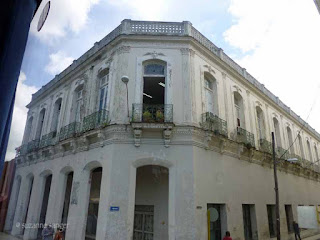 Che Guevara is considered a local hero here even though he was actually from Argentina, and there is a large statue of him at the museum/mortuary that honors him and other key figures in the revolutionary army that eventually caused the fall of the corrupt and murderous US-backed Batista government. There is much to criticize about the Castro regime, but the revolution did rid Cuba of a government that didn’t serve the majority of Cubans well at all and replaced it with a more egalitarian state that despite our usual view, has provided its people with many benefits such as universal education and excellent medical care. 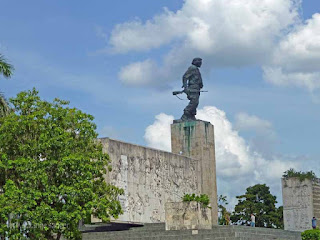 Eventually we arrived at our hotel in Santa Clara, Los Caneyes. This is the word for the round dwellings that the original indian inhabitants of Cuba lived in before Columbus arrived. Unfortunately, these original peoples were almost entirely eradicated by the European invaders, either by disease or by being killed off. Columbus may be celebrated as the “discover of America,” but he was NOT a nice guy, it seems. The hotel, however, is quite charming, with a sort of sophisticated country air. The rooms are a bit primitive by our standards, but perfectly adequate, very clean, and laid out in individual pods of six units per round building. We are told to remember to brush our teeth with bottled water, but were pleased to discover that the rooms contain both 220 and 110 plugs, so we can charge all our devices with no need for converters of any kind. I guess they sort of said that in our pre-trip information, but not in a way that most of us understood clearly.

After we settled in a bit, I went to the desk to change some US dollars into Cuban money, and on the way back enjoyed the ambiance of the grounds, including the presence of a couple of roosters and their attendant chicks and chickens. Not too sure I’m going to like that rooster presence come morning. 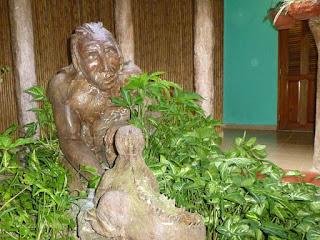 We dined at the hotel’s buffet, pretty good for a government owned facility, but not as nice as our lunch was. After our very early start today, we were all glad to head to bed for some catch-up sleep.
Posted by Suzanne Sanger at 9:54 AM 1 comment:

Friday, September 18. That handsome rooster and his gang were even more trouble than I feared. They started crowing by 3:30 this morning. Rooster soup for dinner sounds like a great idea. Barbara hardly heard the din because she always travels with silicon ear plugs with the brand name of Mack. She has two pair with her and has kindly given the spare pair to me. I look forward to better nights ahead!

Our objective today was a tour of a small old colonial town, Trinidad. This is a very old town, dating from the early 1500s. We were told to wear sturdy shoes for the cobblestone streets, which are charming, but make for difficult walking. Some of the special features of the old buildings, many of which were home to the region’s wealthy sugar barons, are 18-foot ceilings and very tall windows and doors, designed to keep the rooms somewhat cooler than the newer low-ceilinged rooms that replaced them in later centuries. This older style is much prized in Cuba today because few people have air conditioning other than what the architectural design can provide. Intricate tiled floors are another beautiful feature that has survived all these years. I’m sure most have needed restoration, but they really are lovely. A word of explanation about housing. Following the revolution, the Castro regime effectively nationalized all property in Cuba, but Cubans who did not flee were allowed to remain in their homes and even pass them on to other family members. They were also allowed to swap homes. When Raúl came to power, he began to allow these homes to be sold. While Cuba has not had a real estate market as we know it, they have had a form of private ownership despite their communist/socialist form of government. There are government owned apartment buildings in Cuba, but there is also private ownership. 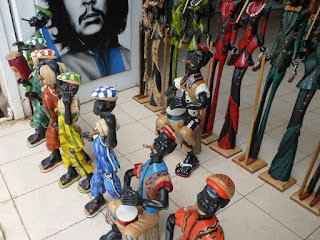 We went to a fairly new privately owned bed and breakfast where the owners’ son met us and told us about his family’s enterprise. It is in a very old house once owned by a sugar baron. The last surviving member of that family was a very elderly lady for whom the house was way too much to maintain. The current owners are a husband and wife singing team who, when we visited, were in Scandinavia on tour. They saw the possibilities of the house for both a performing venue and a hotel so agreed to swap the small house they owned at the time for this one. They have been restoring it while renting out four rooms at something like $35/night to bring in funds. We were able to see one of the rooms with its private bath, the living room, dining room, beautifully redone kitchen, and the delightful patio. The decorative painting on the walls in the living room is original, only partially restored because it has become impossible to find anyone with the skills needed to do the work. Personally, I liked being able to see both. The restoration was lovely while the original lent it authenticity. 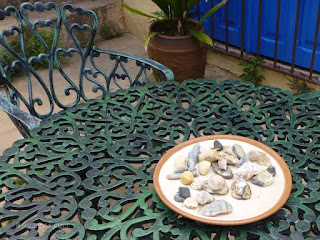 We walked back through the town to a paladar where one of our choices for lunch was Cuban lobster. I ordered that, expecting it to be small and was amazed to get a tail the size of a Maine lobster with a very similar flavor. It was a bit over-cooked, but really a terrific surprise. 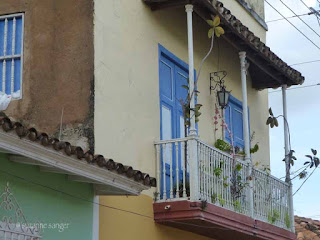 After lunch we went to a pottery that has been in the family of the potters for many generations. The grandfather was working on the wheel and amazed us as he threw out pot after perfectly formed pot as quickly as if he were a machine. Once he finished his ball of clay, he asked for a volunteer to try the art. Our brave volunteer was Joan, from NC and on the tour with two of her adult children—Mark and Alana. Joan is pretty amazing. She was a psycho-therapist and only after retirement took up singing and acting. Her kids say she is fearless and untiring, and the rest of us can see that is true. She HAS tried her hand at pottery in the distant past, although not, she says for a very long time, and that helped her produce a credible pot that even looked like a pot. Our tour leader, Carole, said she did FAR better than any other volunteer she has ever seen. Better her than me. I would have had it all over the floor, I’m sure.

We drove back to Santa Clara and arrived too late to get much rest before we were off for another paladar meal, this time a beautiful plate of cold salad fixings including shrimp. I can’t say how surprised and delighted we have been with the food in Cuba! 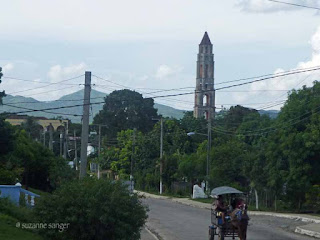 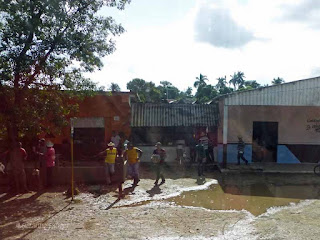